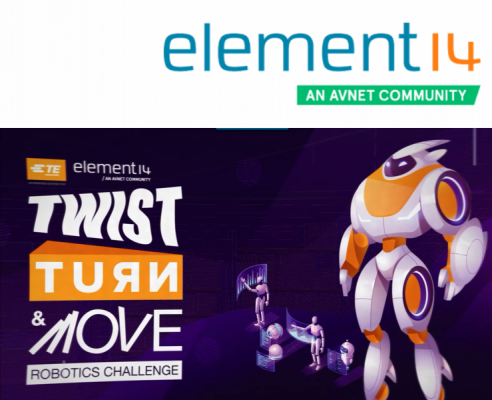 element14 Community has announced the winners of its Twist, Turn and Move Design Challenge. Ten challengers were equipped with a selection of TE Connectors, an Arduino Uno and robotics shields, with competitors given 11 weeks to design and build a robotic arm or mobile robot to complete a specific task.

“We were blown away by the creativity of the challengers throughout the Twist, Turn and Move Design Challenge. Not only did they think practically about the use of robotics in everyday life, but they also truly showed their ingenuity,” said Dianne Kibbey, Global Head of Community and Social Media for element14. “Through the challenger’s blog posts, it is amazing to see the thought process that goes into these creations. We are so happy to announce our winners and continue to support an amazing community of creative engineers.”

“I am amazed by the outcome of this exercise,” said Michael Steuer, Global Account Manager Industrial, TE Connectivity. “History has shown that great developments sometimes start small and with a good idea, so I’m excited to see where these ideas go!”

Of the 10 sponsored challengers in the Twist, Turn and Move Design Challenge, eight completed all five blog posts and presented their final projects. The element14 Community team of judges selected one Grand Prize winner and one runner-up:

Challengers were judged on their ability to use the Challenger's Kit most creatively, along with publishing media rich blog posts with photos, videos and code samples. The remaining six participants received a Multicomp Pro Multimeter valued at $30 as a finisher prize.

Learn more about the Twist, Turn and Move Design Challenge and other challenges from element14, an Avnet Community.

Everything you need to know about RF and Ceramic Capacitors

element14 Continues Summer of Sensors with Series of Educational Webinars

element14 Celebrates Community Designs That Give Back