Are you the next Ben Heck? 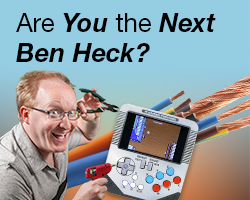 element14.com, the community for engineers, is launching a search for the next “Ben Heck” though a global contest entitled “Hack like Heck”. The contest, running until mid-April, is based on one of Ben’s popular hacks, the Raspberry Pi MAME Mod, as featured in Episodes 322 and 328 of “The Ben Heck Show”. Community members will be challenged to build the project, film their progress and post a video within a three week period.

The “Hack like Heck” contest breaks into six acts:

·Act 1: Auditions - With a Couple of Chances to Win! - Closes Wednesday, 9-March

·Act 2: Declare Your Intention to participate!

·Act 3: Create Your Project and Video!

·Act 5: Voting for the Winners

The element14 community is asking for 15-30 second audition tapes to be submitted online by 9th March 2018. At the end of the entry period, the best 10 entries will be chosen by the element14 team and will receive the Bill of Materials from the original build to get them started as well as the unique opportunity to join a Skype session with the entire cast of “The Ben Heck Show” allowing them to talk about the original build and the teams experiences filming and modding over eight years.

But members don’t have to win the auditions to enter the main contest – element14 community members can still submit a video of them building the project by 2nd April 2018 to be eligible to win.

All final submitted videos will be published on 4th April as part of the “element14 Maker Film Festival”. Community members will be able to vote for their favorite video and Hacker. The top ten finishers each get $500 and one of those ten will get to visit Madison Wisconsin, where “The Ben Heck Show” is filmed and appear in a future episode.

Dianne Kibbey, Head of community and social media for Premier Farnell said: “We’re always exploring new ways to attract fresh content for our community members to watch. We are disappointed that Ben is leaving “The Ben Heck Show” after eight amazing years - but look forward to working with a number of new video content partners, building new relationships, and some great new content! I encourage any of our members who have thought ‘I could do that’ to have a go and Hack like Heck.”

Benjamin Heckendorn, known as Ben Heck, will be leaving “The Ben Heck Show” in July 2018. He stated: “Being part of The Ben Heck Show has been a dream job. All my electronics parts are paid for, I get to build what I want, and I never have to read the YouTube comments! It’s been a lot of fun, but it’s also been a lot of deadlines and after eight years it feels the right time to hand over the soldering iron to someone else”.

To find out more visit the element14 community.

element14 Community Issues ‘Design for a Cause’ Challenge