The global competition to find the longest servicing Raspberry Pi application currently in use features a giveaway of 10 major prize packages consisting of 10 Raspberry Pi Picos and a Pi NoIR 8MP Camera. 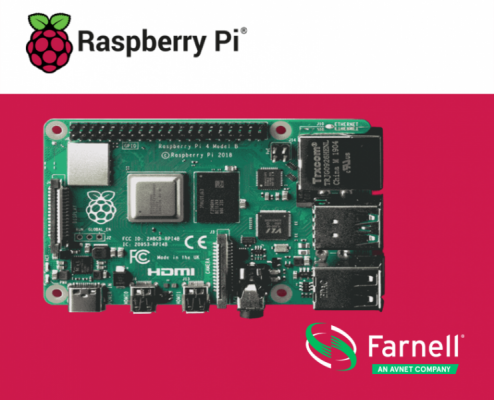 Farnell, an Avnet Company and global distributor of electronic components, products and solutions, is today celebrating its 10-year manufacturing and distribution partnership with Raspberry Pi Ltd with the launch of a competition to find the longest serving Raspberry Pi application currently in use.

To mark this significant milestone, Farnell is giving away 10 major prize packages consisting of 10 Raspberry Pi Picos and a Pi NoIR 8MP Camera to professional design engineers, hobbyists, makers, educators or students who can demonstrate the longest serving Raspberry Pi application. To enter the competition, participants must submit an entry via the element14 Community, including a brief description about the application and a photograph to evidence their Raspberry Pi in action.

The global competition is now open and participants can submit entries until Saturday, April 30. Ten major prize packages will be awarded to the most successful applications in May 2022. The prizes can be claimed by the winners or donated to a local school, coding club or college in the winner’s country of residence. Terms & Conditions apply and the judge’s decision is final.

Farnell has been the longest serving strategic business partner Raspberry Pi Ltd and has helped the Raspberry Pi become a global phenomenon, with tens of millions of units sold around the world.

Romain Soreau, Head of Single Board Computing at Farnell, said: “We are pleased to have been instrumental in the huge growth and impact that the Raspberry Pi has had across the globe, helping further education of younger generations and drive the development of innovative SBC applications. The rapid adoption of the Raspberry Pi has made it the UK’s best-selling personal computer of all time. Raspberry Pi is now the world’s third most popular general-purpose computing platform, after the PC and Mac, and is used internationally by millions of young people, academics, hobbyists and industrial businesses.”

Farnell is giving away 10 major prize packages which includes the following products:

·       Raspberry Pi Pico – A flexible, high performance and low-cost development platform that can be deployed directly into end products. The Raspberry Pi Pico features 2MB of on-board QSPI Flash, 26 multifunction GPIO pins (of which three can be used in analogue inputs), and an onboard buck-boost regulator. User-friendly developer tools are available including simple drag and drop programming via micro-USB, 3-pin Serial Wire Debug (SWD) for interactive debugging, a comprehensive C SDK and a mature MicroPython port. With castellated pads, Raspberry Pi Pico is designed for integration into a range of professional microcontroller applications.

·       Pi NoIR 8MP Camera – The infrared camera module features the same 8MP image sensor as the standard Raspberry Pi camera without an infrared cut-off filter to increase IR light sensitivity. The Pi NoIR is compatible with all Raspberry Pi models and provides high definition, high sensitivity, low crosstalk and low noise image capture in an ultra-small and lightweight design. The camera module connects to the Raspberry Pi board via the CSI connector which is capable of processing high data rates.

Farnell is seeking examples of embedded designs and other Raspberry Pi-based systems that have been in operation for a significant period of time since the original product line launched in 2012. Legacy systems that have made a significant impact on innovative technology and deployments demonstrating longstanding use are of also interest to the judging panel.

Some innovative applications showcasing how the Raspberry Pi is being used around the world, include:

·       Orchards saved from pests with Raspberry Pi – Researchers from the University of Trento have developed a Raspberry Pi-powered device that automatically detects pests in fruit orchards allowing early preventative action to be taken. An embedded system uses machine learning to process images captured inside pheromone traps and the Raspberry Pi computer manages the sensor, processes the captured images and transmits them for classification. When this task is done manually, farmers typically check codling moth traps twice a week, this automated system checks the pheromone traps twice every day, making it much more likely to detect an infestation before it causes damage.

Farnell is the longest standing Raspberry Pi Ltd partner and stocks the complete range of Raspberry Pi single board computers (SBCs), enabling customers to build a wide range of devices for professional, commercial, education or home use. A diverse ecosystem of accessories is available including cases, power supplies, micro-HDMI cables and the Raspberry Pi High Resolution Camera.

Farnell can offer support with provision and bundling of equipment for bespoke large-scale programmes. Customers can also benefit from 24/5 technical support alongside free access to valuable online resources on the Farnell website, and engineering and maker community, element14.

Find out more information and enter the competition at: Farnell, Newark and element14.