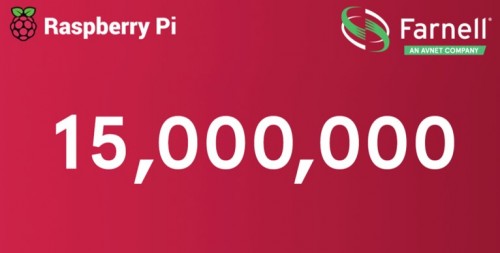 Farnell, the Development Distributor, is the leading manufacturer and distributor of the Raspberry Pi single-board computer (SBC), which it has sold to electronic design engineers, educators, hobbyists and makers since its launch in 2012. Farnell’s sales alone, which are supported by its holistic offering including a diverse ecosystem of accessories and support through its element14 Community, have now reached the remarkable total of 15 million devices worldwide

Raspberry Pi’s most recent launch, the Raspberry Pi 4 Model B computer, has driven a significant increase in sales. This new board is the most powerful Raspberry Pi to date: three times faster than the previous model with a range of memory options and improved interfacing and connectivity to extend capabilities for all users. Raspberry Pi 4 can be used as a high-performance embedded platform, or as a full-featured desktop computer.

Farnell stocks all Raspberry Pi models, alongside its diverse ecosystem of accessories, which supports users as they build devices for home, education or commercial applications. Farnell has championed Raspberry Pi through its element14 Community, creating a forum for its 650,000 members to access informative and educational threads, be inspired by fellow members’ ideas, and get involved in Raspberry Pi-based design challenges.

Farnell also supports customers as they bring products to market with its maker-to-market service, programmes for startups, 24/7 technical support and an exclusive agreement with Raspberry Pi (Trading) for the customisation of Raspberry Pi products. Customers supported by Farnell include French startup Airnodes, who developed a smart mirror which can now be seen in hotels across France, and Futurehome, based in Norway who developed an app-based home automation system using a Raspberry Pi-based platform customised by Farnell.

Lee Turner, Global Head of Semiconductors and Single Board Computers for Farnell says: “Farnell is Raspberry Pi’s leading global distribution partner, selling 15 million devices since launch in 2012. This is a major milestone for Farnell as well as the Raspberry Pi Foundation and we are delighted to have shared the journey with them so far. The new Raspberry Pi 4 Model B Computer is a gamechanger, providing customers with a faster, more powerful and more feature-rich single board computer than ever before. The power of the Raspberry Pi 4, Farnell’s extensive distribution network, and the strength of Farnell’s parent company, Avnet, in developing devices such as the Avnet Smartedge Industrial IoT Gateway, powered by Raspberry Pi, can only pave the way for more great things from this little board.”

Eben Upton, CEO of Raspberry Pi (Trading), says: “We have been working with Farnell since 2012 to put Raspberry Pi products in the hands of hobbyists, educators and professional design engineers all over the world. In 2015, we announced an exclusive agreement to provide customized variants of our products to Farnell’s engineering customer base, and in June this year we launched Raspberry Pi 4 Model B together, bringing PC-equivalent performance to the sub-$50 price bracket. We are extremely excited that Farnell have crossed the 15-million-unit mark; we look forward to shipping many more units together, and continuing to change lives all over the world.”

Raspberry Pi computers and accessories are available from Farnell in EMEA, Newark in North America and element14 in APAC.

Farnell adds ECS Inc. International to its linecard in EMEA

Farnell element14 add IDEC to its portfolio of Industrial Components

Newark element14 Named Exclusive Distributor for Electrolube in the U.S.