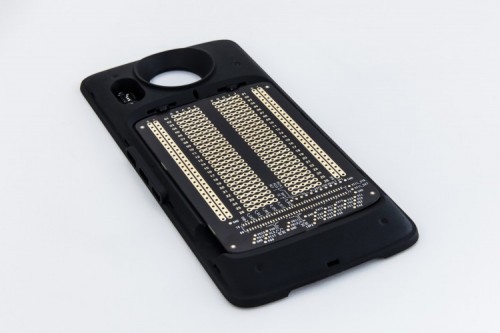 Available to buy exclusively from element14, the maker and developer focused Moto Mods Development Kit (MDK) has been launched after an agreement was signed between Motorola and their new global distribution and manufacturing partner, element14.

Designed to connect to the new Moto Z family of smartphone, the MDK enables makers to transform the capabilities of their smartphone by creating their own, custom applications called Moto Mods. The kit is now available to buy exclusively from element14.

As the leading manufacturer and distributor for the maker and developer market, and the number one supplier of single board computers, element14 was a natural choice to partner with Motorola as they launch the Moto Mods Development Kit. The MDK offers up the potential to revolutionize the future capabilities of the smartphone.

“element14 believes the industry’s best innovations occur when the technologies powering them are made more accessible to more people,” said Claire Doyle, Global Head of element14’s Single Board Computing division. “We are changing the landscape of the maker and developer market by partnering with major global brands to make this happen. We are delighted to be Motorola’s exclusive partner for the Moto Mods Development Kit.”

Owners of any Moto Z smartphone can buy the MDK exclusively from element14 enabling them to prototype Moto Mods, to instantly transform their smartphone into an entirely new device unlike any other smartphone on the market. The Moto Mods magnetically snap onto the back of the phone, seamlessly become one with the handset and temporarily change the phone into any number of other devices, including a speaker, or even a projector. Motorola along with element14 are the only manufacturers offering this level of customization.

The unique ability for such high level customization and development using Moto Mods is all thanks to the revolutionary Moto Mod Smart Surface. Smart Surface provides a direct electrical connection to the phone, giving developers access to the phone’s power and data paths. This system allows developers to create custom hardware that can be controlled via the handset and provides them with the capability to design and commercialize their own Moto Mods, opening up new avenues for creativity in the maker and developer community.

Motorola has selected element14 to exclusively take this new product to the market globally, reflecting element14’s position as a champion for makers and developers, its global footprint and experience in this growing market. The Moto Mods Development Kit is a true game changer for the smartphone

industry. A technology that was once only available to industry insiders is now available to everyone – offering them the opportunity to help build an ecosystem that will change the future of mobile.

The Moto Mods Development Kit includes everything users need to connect to their Moto Z smartphone and begin prototyping instantly. Included is a Perforated Board to solder components to, an example cover and a Reference Moto Mod. All of the components of the kit will also be available for purchase separately from element14.

element14 is also offering the Moto Mods HAT Adapter Board to extend the Reference Moto Mod for use with existing Raspberry Pi HATs, and Moto Mod’s Personality Cards (Audio, Battery, Display and Sensor), with open-sourced electrical and mechanical schematics, Moto Mods firmware, and Android™ Apps that serve as examples of how users can create their own prototypes.

To learn more about the Moto Mods Development Kit and place an order today, visit www.element14.com/community/groups/moto-mods.

About the Premier Farnell Group

Premier Farnell is a global leader in high service distribution of technology products and solutions for electronic system design, production, maintenance and repair. Trading as Farnell element14 in Europe, Newark element14 in North America and element14 across Asia Pacific, it had sales last year of £982.7m, the Group is supported by a global supply chain of more than 3,000 suppliers and an inventory profile developed to anticipate and meet its customers’ needs.

Premier Farnell works to bring to market development kits in a variety of applications, enabling it to support the customer from design concept through to production.