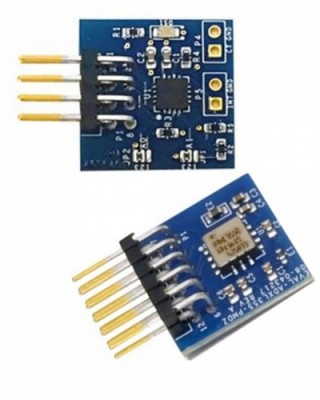 Premier Farnell is now shipping the EVAL-ADT7420-PMDZ and the EVAL-ADXL355-PMDZ boards from ADI.

The Pmod (Peripheral Module) interface is an open standard specification used with FPGAs and microcontrollers. When prototyping, these boards are used in conjunction with the ADICUP360 (an Arduino form factor compatible ARM Cortex-M3 development platform) or the ADICUP3029 (an Arduino based wireless development platform for IoT applications based on an ultra-low power ARM Cortex-M3 processor). SPI and I2C PMOD peripheral connectors can also be found on many 3rd party MCU or FPGA development boards, where the PulsarPMOD board range can be connected directly into those systems, allowing you to develop your own code using ADI reference code found online.

The EVAL-ADT7420-PMDZ is a temperature measurement PMOD board accurate to 0.25 degrees Celsius. It has an I2C connector and is connectable to FPGA and MCU platforms.

The EVAL-ADXL355-PMDZ is a low noise, low drift 3-axis accelerometer PMOD board with 20-bit acceleration resolution and is also connectable to FPGA and MCU platforms.

Direct electrical and physical connections enable you to get started quickly with hardware and software, to help develop your solution.

These two PMOD compatible boards are now available from Farnell element14 in Europe, Newark element14 in North America and element14 in APAC. Visit the element14 Community for more information on the EVAL-ADT7420-PMDZ and the EVAL-ADXL355-PMDZ.