Machine learning does not have to be complicated models that cannot be deployed to MCUs, it could be a model-free learning algorithm. Here is a video of the final project in action.

The motorcycle balances for about 10 -15 seconds, but further training and changing the incentives of the reward function can train it to balance longer

How It All Started

I decided to use one of the robots from the Arduino Engineering Kit: a self-balancing motorcycle. In the motorcycle, an inertia wheel is used to balance the system instead of controlling the cart that pivots the pendulum. I wanted to apply the Q learning algorithm to the motorcycle instead of the classic cart pole problem. One major benefit to using the motorcycle was there is a high quality Simscape model available. I used this to train and test different versions of algorithm. Although the model is an approximation and did not perfectly describe the motorcycle in real life, it was a great starting point before deploying to the actual hardware.

Reinforcement learning is the iterative process of an agent, learning to behave optimally in its environment by interacting with it. What this means is the way the agent learns to achieve a goal is by trying different actions in its environment and receiving positive or negative feedback, also called exploration.

In the context of the self-balancing motorcycle, the agent is the motor controlling the inertia wheel. The way it interacts with its environment is by spinning the wheel at different speeds, and the feedback it receives is the new angular position and velocity, measured by an on-board IMU. Positive and negative feedback is determined by a unique reward function; I have elaborated on the reward function below.

Here is a high-level diagram of the Q-learning iteration:

Steps 4 – 6 occur in one timestep of execution of the algorithm.

The states that I used are the angular position (vector of length M) and angular velocity of the motorcycle (vector of length N). The actions are the torque commands (vector of length P). The Q matrix is an M x N x P vector that shows all possible states and every possible action at each state. The key is discretizing each space coarsely enough to capture the learning.

What worked and what did not

Once the motorcycle is assembled, download the files available here and open the RL_balance.slx model.

Plug in the battery and power on the motor carrier. Run the model. It will take a while for it to upload the first time you run it.

When it is running, calibrate the IMU by picking up the motorcycle and rotating it around all 3 principal axes. The “Calibration Status” display block should display 1.

In the scope block you will see measurements for theta, theta dot and the Torque Command. Manually attempt to balance the motorcycle, while visualizing on the theta scope where the balance point is. 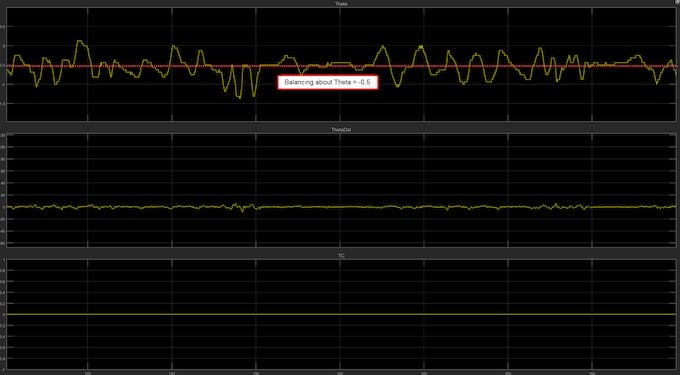 Then, use the Tilt Compensation slider to offset theta by that amount (this is inside the IMU Outputs block).

For example, if you see the physical balance point of the motorcycle is around theta = -0.5, you would move the tilt compensation slider to the right 0.5 to offset this error.

Once you have the physical balance point synced with theta = 0, then you can click the “isBal” rocker switch to indicate that the robot is balanced.

Click the “held” rocker switch once to disable the training loop. Hold the motorcycle in an upright position close to theta  = 0.

Click the held rocker switch to continue the loop, allow the motor to engage, and then release the motorcycle without pushing it in either direction.

When the motorcycle falls, it is the end of that training. Repeat from previous step to continue training.

Have patience. To put it in perspective, 15 hours of training went in to balancing for 10 seconds.

Some things you can try to better train the model would be increasing the resolution of the state and action spaces, initializing the Q matrix to something other than all zeros, and trying different reward functions that prefer different outcomes.

The Q -learning algorithm “converges” when the goal (balancing 10 seconds) is reached. In other words, the Q -matrix does not appreciably change. Unlike neural networks where training is separate from deployment, Q-learning is model free, so deploying the algorithm is the same as training it. We can afford do this because there is low computational cost to training the Q-learning algorithm.

This is a little dense, but if you are interested, here is an introduction to reinforcement learning by the pioneers of the field: http://incompleteideas.net/book/bookdraft2017nov5.pdf

This content has been marked as final.  Show 9 comments
By date: By tag: