IoT: In the Cloud 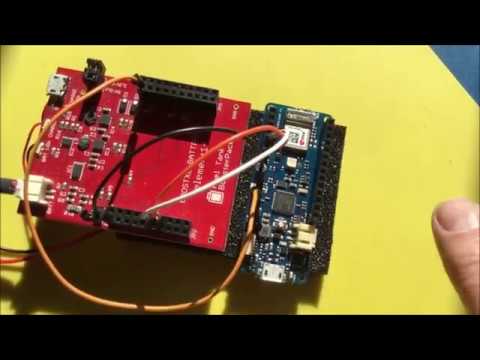 My design is going to sleep most of the time.

At predefined wake-up intervals, it'll do its business (a sensor query and battery check).

It will post data to an Amazon Web Service, where that info can be collected and acted upon.

Because I want to start the design with low power use as a basis, I decided to investigate that first.

Arduino has published a Low Power Library for SAMD21 based boards. I'm using it's TimedWakeup sketch as the core for my program.

This example puts the device to sleep for a given period. At each wakeup, it calls an interrupt handler, then runs one loop().

That's a decent start for my low power device.

Most of the time, the biggest consumer is that the green ON LED was is always lit.

That consumes 7.7 mA. That's why it's marked NO on the pcb

I removed it from the Arduino.

image: the ON LED desoldered from the pcb.

That's the name of the sketch from the Low Power lib that I use as starting point.

At the end of each loop(), it tells the Arduino to go sleep for a while.

You can choose the sleep mode: sleep or deep sleep, by defining DEEP_SLEEP as 0  or 1.

At wakeup, it first calls an interrupt service routine.

You can perform some quick things there, like setting flags. Don't put slow code in the ISR.

Then, it lets the loop() execute another cycle and goes back to sleep.

image: connections between the battery pack and the MKR WIFI 1010

Why an External Battery Manager?

The MKR WIFI 1010 has a battery manager on board. But that one can't report battery health.

That one has a bq27510-G3bq27510-G3 Li-ion battery fuel gauge on board that maintains stats on the battery capacity.

I can ask it how many Ah remain in the battery, an indication for how long it can survive before charging is needed.

There's a decent amount of devices connected to the i2c bus:

The Arduino has 4k7 pull-ups on board. I disabled the ones on the battery management module.

Our very own peteroakes wrote a sketch to read the statistics from the fuel gauge.

It worked straight way on the MKR WIFI 1010.

image: the MKR WIFI 1010 runs Peter Oakes' sketch to get data from the Fuel Tank BoosterPack

Definition of the not-so-common stats:

There's a rule of thumb approach on the Arduino website: https://www.arduino.cc/en/Tutorial/MKR1000BatteryLife

The formule they use is:

When the battery is 70 %discharged, they advise you to charge it again, to avoid deep discharge and deal with variations (like temperature).

However, because I have a good estimate of remaining capacity from the fuel gauge, I will not take in account the on-time and average current consumption to calculate the battery statistics.

I will use the average current consumption to extrapolate remaining on-time though.

Measuring that average current is done in a different blog post. I will use the results here once that's finished.

Setting up a secure connection with AWS is a topic on its own. Arduino has provided an excellent how-to that brings you from "Zero" to "MQTT Working".

I dedicated a separate blog post on that topic.

Use the Data and AWS Rules

In this blog post I'm focusing on getting the data safely to the AWS MQTT server.

I'm writing another post on how to move it from the MQTT server to a database, how to report on it, and how to set up a rule if the battery capacity drops below 70%.

It is a topic that is fully independent from the device design, so a separate post will be less clutter. And I still have to learn it

(edit: I learned it now. Here is the flow between the AWS services, for data capture,  analysis and alerting)

To make it easier to parse data on the AWS side, I want to structure the payload.

I'm formatting the info into a JSON structure. That structure holds data name and value, and can be extracted without manual parsing later.

I'm conservative here, and use printf to construct the data. The better me would create a class that has members for all data points and a method to stream itself to a JSON string.

In the AWS testbed, you can see the message arriving:

The sketch is attached.

This content has been marked as final.  Show 33 comments
By date: By tag: