NFC is very useful and is easy to use considering the availability of the parts. I made a project with NFC and Raspberry Pi as follows.

Like many people, I work in a room with a workbench, lights, fans, Air-Conditioning and bench test equipment etc. During work hours I have a habit of taking trips away from the bench for a multitude of reasons which includes

The Solution- “While you were away”

The proposed solution is titled “While You Were Away” because we intend to “sense” when the user is away and optimize consumption in his/her absence. The solution is much more than the simple Motion detector combo because the plan is to implement programmability to the automatic control aspect. The block diagram below shows the various hardware components and their interconnects in the final design. 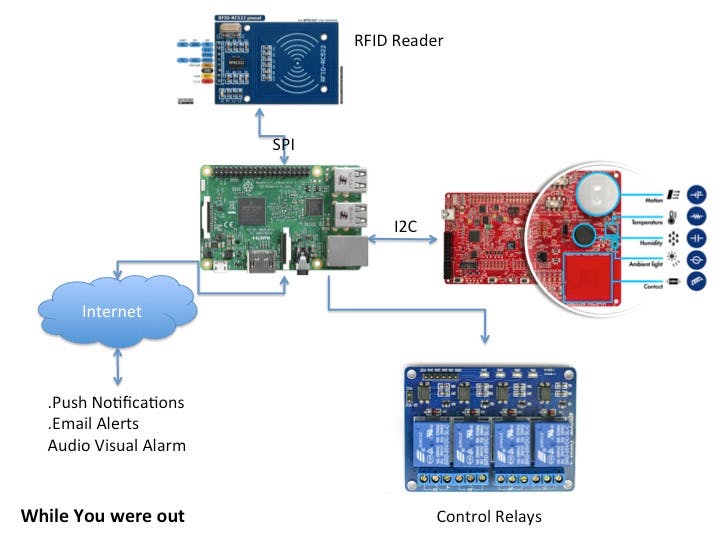 The system is composed of 4 major components. The heart of the system is the Cypress PSOC Analog Coprocessor kit which interfaces with five sensors. A Raspberry Pi 2 is used to run OpenHAB Software that provides the GUI as well as other features. An MFRC522 board is used to scan RFID tags and a relay board is used to interface with electrical appliances. The PSOC runs a custom hardware/software design that is provided on github for download. The Analog Coprocessor reads sensors and stores the values in its internal memory. The raspberry pi 2 communicates with the PSOC kits over I2C and retrieves this data. A python script is used to parse the sensor values and then passes them on to an MQTT broker at iot.ecliplse.org . This architecture is chosen to facilitate future customisation where the PSOC may talk to an MSP430(Code provided) and send the data either via USART or other means.

The python script also enables reading of the RFID tag and listens to specific MQTT topics for commands. These commands are used to toggle the relays which in turn controls appliances. The rules engine, GUI and data logging is provided by OpenHAB which is a free home automation software solution. It runs on the Raspberry Pi 2 as well but can be a remote installation as well for IoT like applications.

Here is a demo video

The code files are available at https://github.com/inderpreet/Project-WhileYouWereOut THis includes all the Python files as well as the Cypress PSOC project files.

Download the STL files from https://pinshape.com/items/32437-3d-printed-psoc-while-you-were-out and 3D Print them

PS: I am still using this project to detect how long I stay at my desk. I use Grafana to visualize the data.

This is all in parallel with the OpenHAB2 system as described above.