As already mentioned in my last blog post (NFC-Badge - Update your badge with your smartphone - Proof of concept ) the content of the ST M24LR or any NFC tg is usually formatted in the NFC Data Exchange Format (NDEF). I found it very hard to get the meaning of every single byte so I will post my summary here.

There exist five different types of NFC tags. This is described at this website: https://www.dummies.com/consumer-electronics/5-nfc-tag-types/ 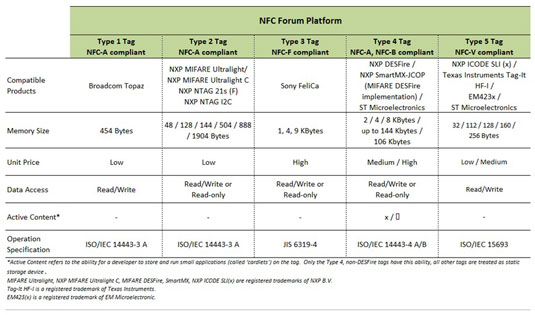 I found most information in the following links:

Now I show the content of a NFC tag with one NDEF Message containing one NDEF Text Record.

The rest of the eeprom is filled with 0x00 or 0xFF. But this doesn't matter.

The NDEF tag could also contain more NDEF messages or more NDEF Records. I hope the structure is now clear and additional records can be decoded using the links provided.

The content of the M24LR can be read out and also written via the I2C interface.

ST25 proposes to use its ST25 NFC Tap app to programm the M24LR. The app is available in the Google Play store: https://play.google.com/store/apps/details?id=com.st.st25nfc&hl=en_US

After startup the app shows this screen and wants you place a NFC tag near the reader.

When the M24LR si placed under the reader the app shows information on this device.

In the NDEF tab the previous described Text Record can be created.

Next I will update the arduino code to fully decode the NDEF content and display the first text message.