The system is designed to detect intrusion (unauthorized entry) into a building or other area. 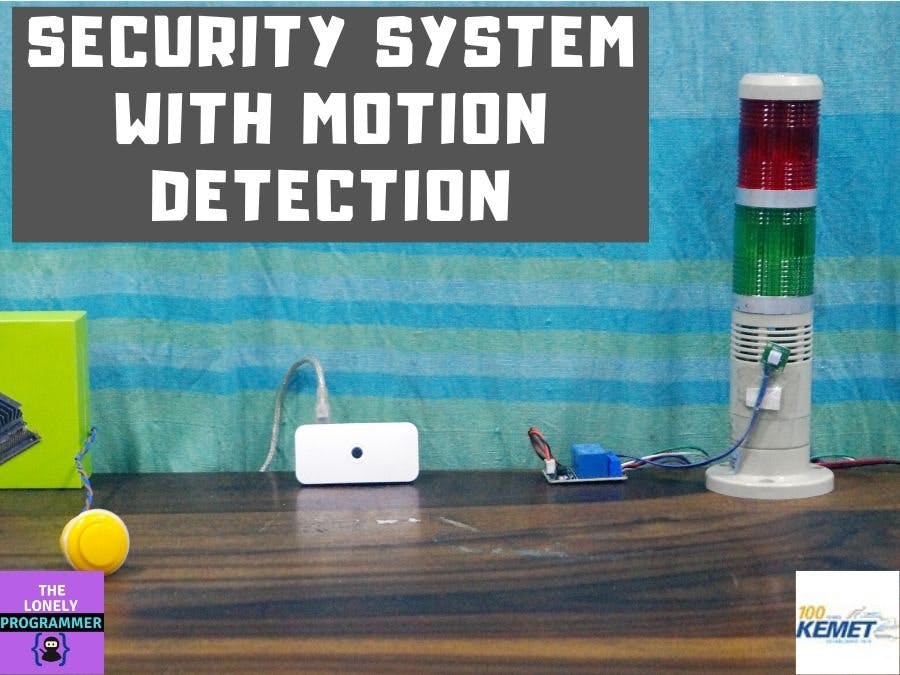 Things used in this project

Why Did We Build This?

There is a lot of theft scenarios nowadays which causes a great loss to the owner. A recent incident at a popular jewelry shop urged me to do this project. 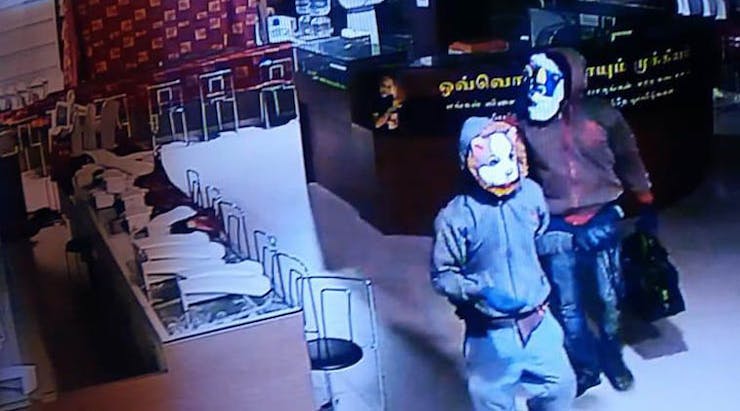 "A jewelry store in Tamil Nadu’s Tiruchirappalli district was burgled in the early hours of Wednesday morning after masked men gained entry into the store by drilling a hole in its wall. The incident took place at ####### Jewellery, a three-storeyed building near Chathiram bus Stand in Tiruchirappalli.

Diamond, Gold and Platinum jewelry worth 13 crore rupees were stolen from the store. I am satisfied with the way the investigation is being carried, the robbers will be caught soon" - Source from Indian Express

The system is designed to detect intrusion (unauthorized entry ) into a building or other area. This project can be used in residential, commercial, industrial, and military properties for protection against burglary or property damage, as well as personal protection against intruders

A compact, a low-profile project is attached to the wall of the area which has to be monitored. This project consists of a camera that will capture the image of the intruder and notify the owner.

To test the real-time scenario, we deployed it on one of the jewelry shops to test how possibly it could help them and the results were pretty affirmative.

Working of the Project

First of all, I would like to thank KEMET for supporting this project with an efficient and low-profile pyro sensor. It really felt helpful to achieve some of the complex designs with this tiny sensor. 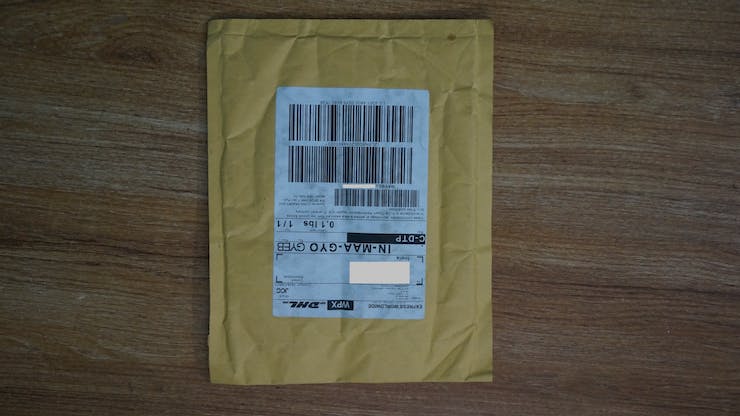 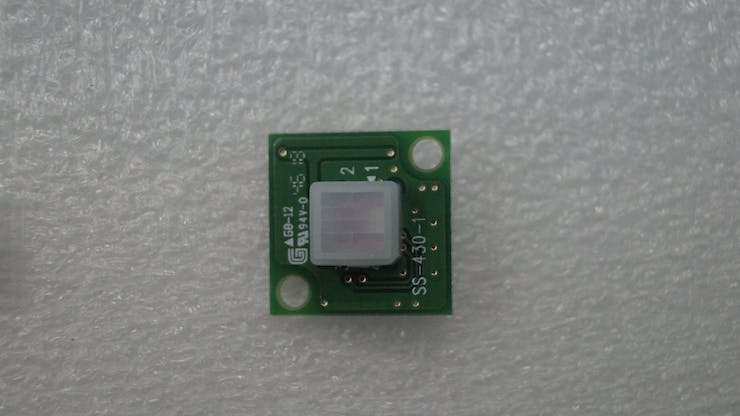 KEMET Electronics Pyroelectric Proximity Infrared Sensor Modules use the pyroelectric proximity effect of ceramic by absorbing infrared rays emitted from the human body. This detects the natural infrared signature produced by humans. It can detect infrared rays without using lenses, allowing a detection distance up to 2 meters. By adding a KEMET proprietary lens, the detection distance can be further improved up to 5 meters. The lens is available in three different colors, to enable some design flexibility. KEMET Electronics Pyroelectric Proximity Sensor Modules in the module solution are even easier to install with the driving being already included in the package, making it just "plug and sense". 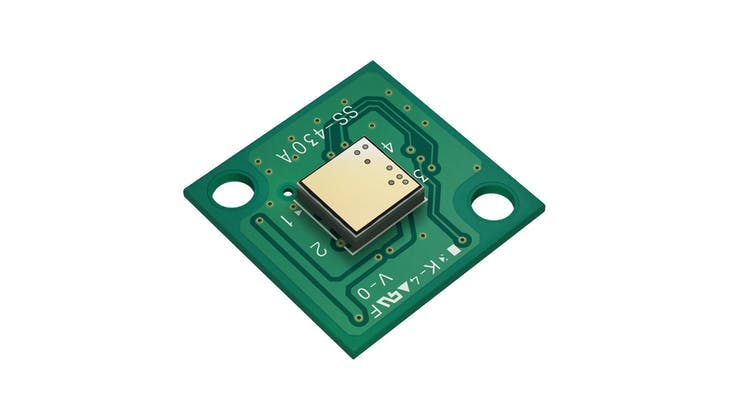 We use the sensor with a white lens which gives a 74° view angle and a range up to 5m.To learn more about the KEMET pyro sensor, do watch the webinar.

Raspbian is the Linux distribution of choice running on the Raspberry Pi. In this guide, we will be using the Lite version, but the Desktop version (which comes with a graphical environment) can be used as well.

Connect the device to your network

On your computer, open a terminal window and type the following:ssh pi@raspberrypi.local. The default password is raspberry 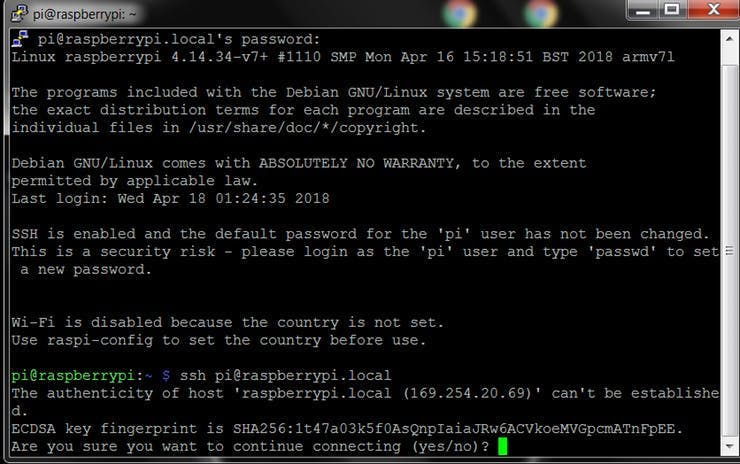 The Block Diagram of this circuit is given below. 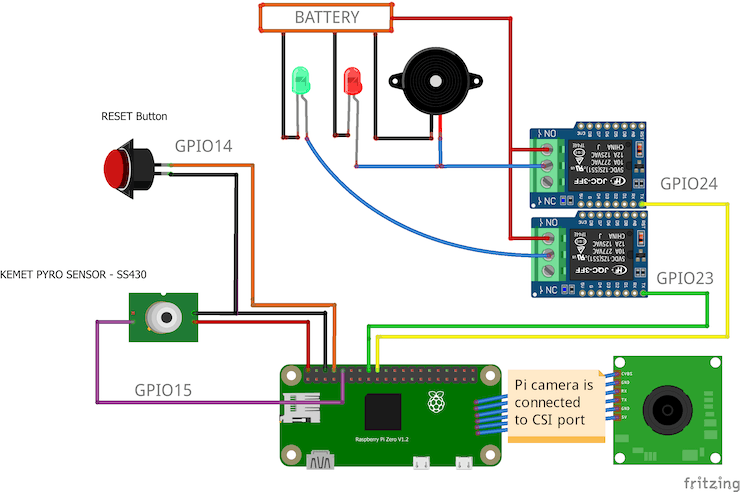 To make these connections, I've used separate connectors for power, relay output, and sensor input. Each connector is soldered to the Raspberry Pi as shown below.

Since the output from the pyro sensor is a digital signal, we connect the KEMET pyro sensor to the GPIO Pin 15 of Raspberry Pi. 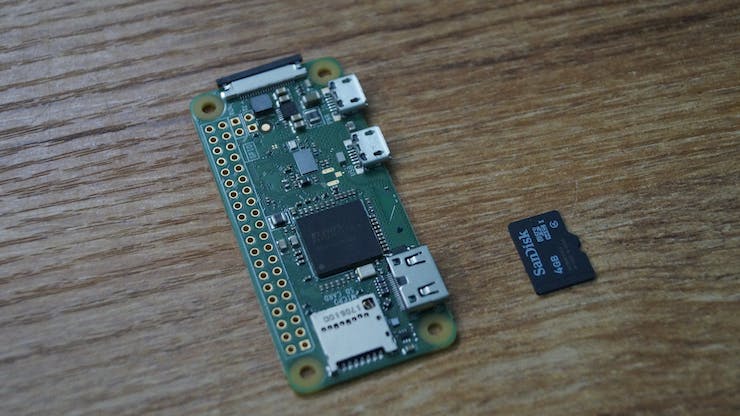 The Pinout of the SS-430 pyroelectric sensor is given below 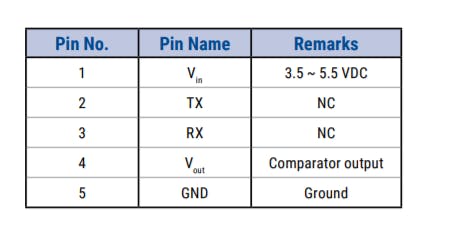 The connection is made as shown below. 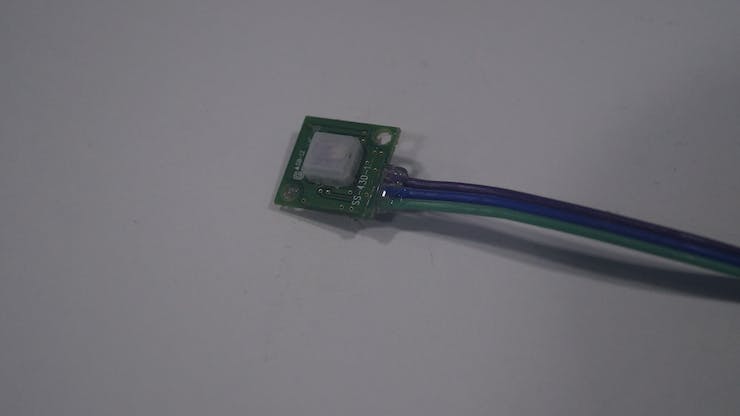 The Pi-camera is connected to the CSI port of the Raspberry Pi. 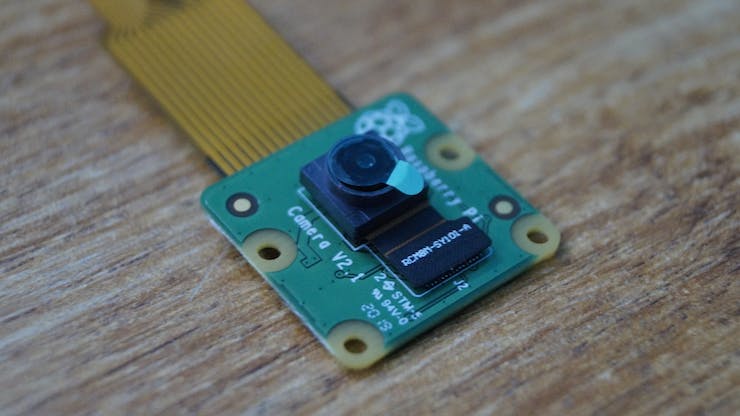 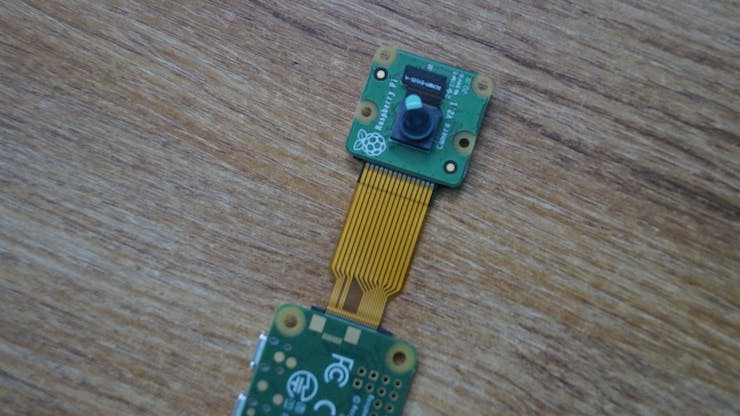 We connect the Buzzer and an Emergency light using a relay circuit to the GPIO pins 23 & 24 of the Raspberry Pi.

The Power Supply is used to deliver the power for the Status Light, Emergency Light, and the Alarm. 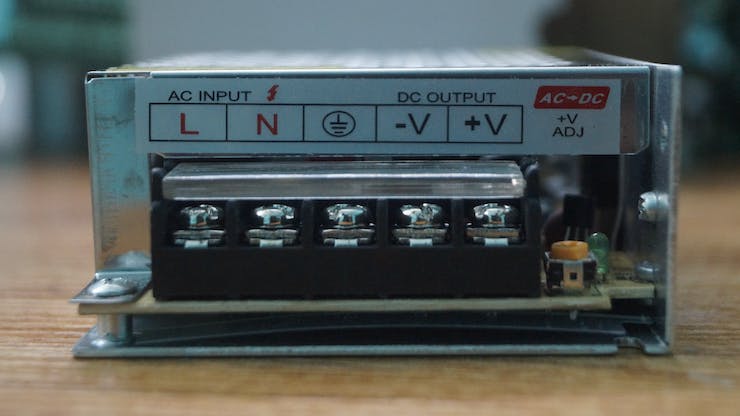 The Industrial grade Light Indicators and Buzzer are used to show the status and alert signal to the security (user). 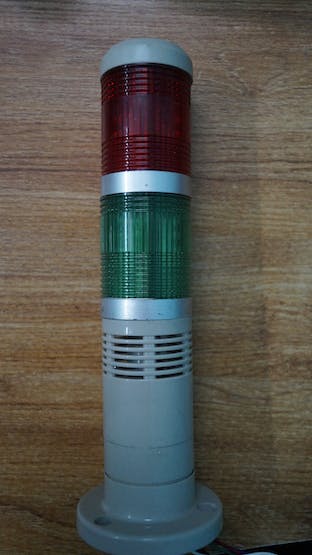 The Industrial grade Light Indicators and Buzzer are connected to the GPIOs of the Raspberry Pi. 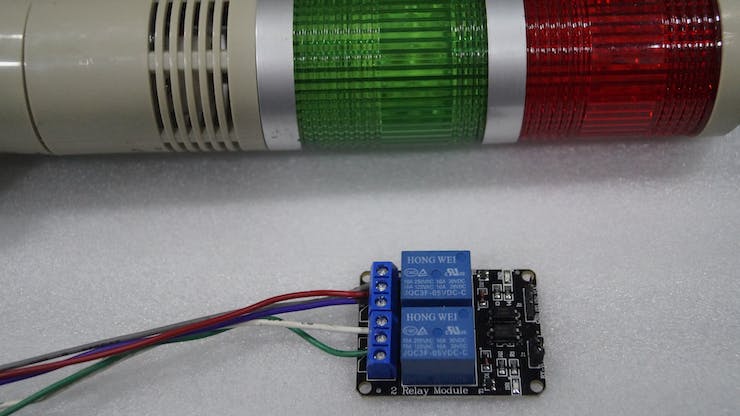 The Emergency reset button is connected to the GPIO pin 14 of the Raspberry Pi. 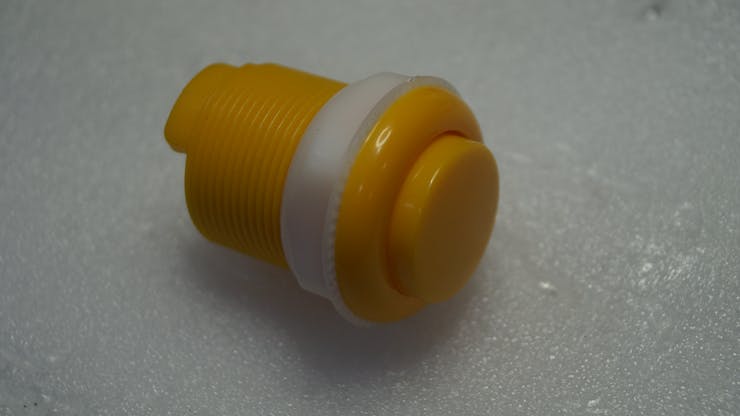 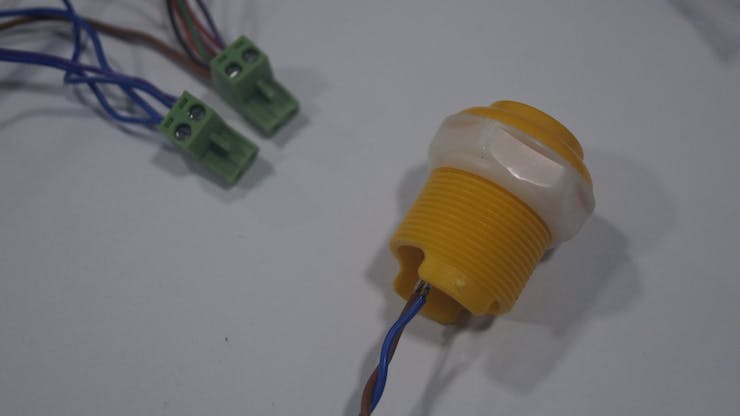 The emergency button is used to turn off the alert manually by pressing it once.

The Overall connection is shown below.

The libraries such as RPi.GPIO and time are used in this project.

GPIO Pin 15 is configured to use as digital input which reads for every 50ms. Whenever the intruder/human enters in the range, the sensor detects and produces the digital pulse.

Although the above code worked, I had a few false triggering. After going through the documentation from KEMET, The SS-430 produces two output pulses of 200msec per detection. This can be interpreted by the Raspberry pi using the following code: 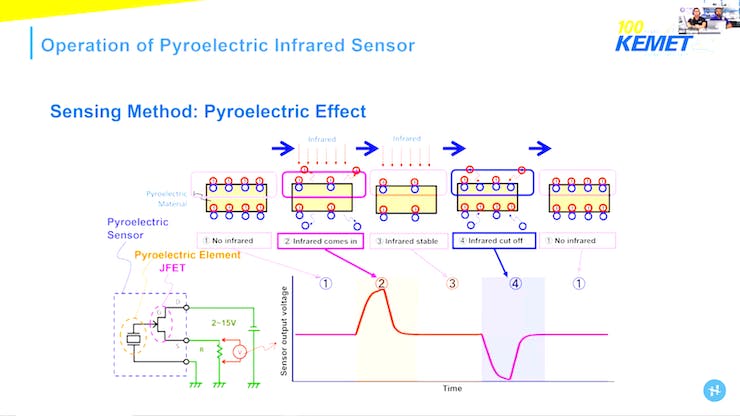 Timing Diagram from the webinar

Now the sensor can determine the presence of the human within the specified range and view angle. 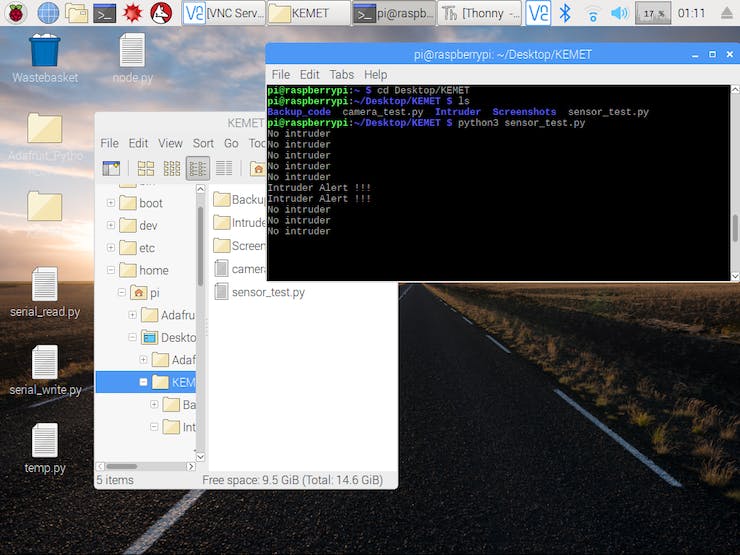 After a lot of struggles and effort, I have created a library to interface KEMET's pyro sensor with the Raspberry Pi.

The picamera library is installed using the following command

When the intruder is detected, the event is triggered and the system captures the images of the intruder. The images captured are stored in a folder with the timestamp attached to it. 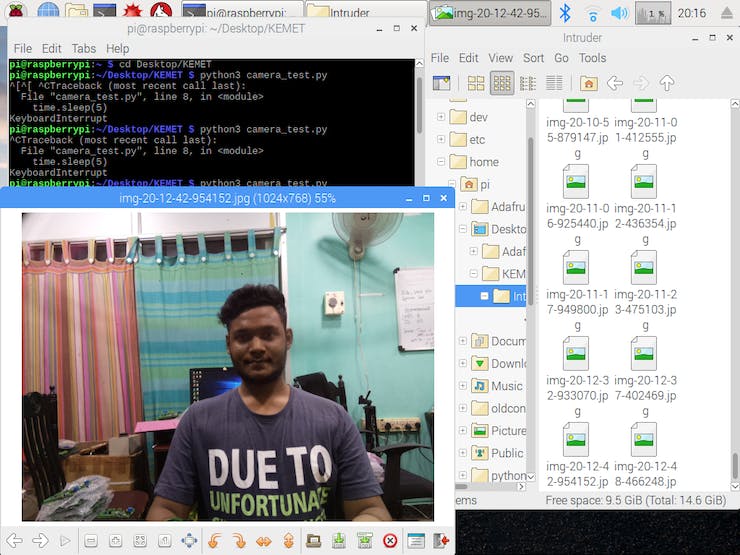 Camera output and a screenshot of the directory

From the above example, the picture of the intruder is captured by the device which has to be transmitted to the master (owner).

First, we add the Smtplib package allows us to set up the Gmail server. Install an SMTP service with the command 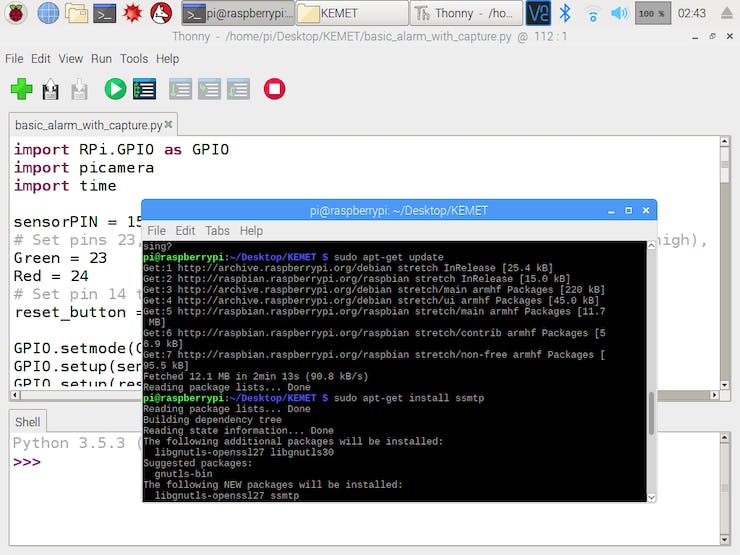 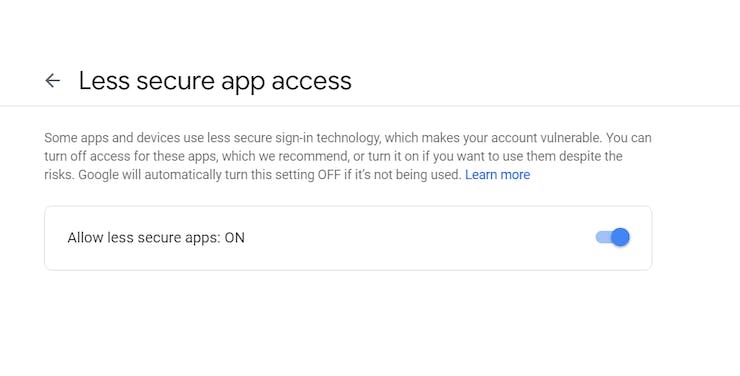 These four modules are used to send the emails from a Raspberry Pi:

We need to add the receiver's email and sender's email address and password, in our case both, are the same email as shown below:

By making several adjustments to the code, you can change the Subject, sender address, receiver address, and the content of the body. The images are sorted and the latest image is sent via Gmail (SMTP). 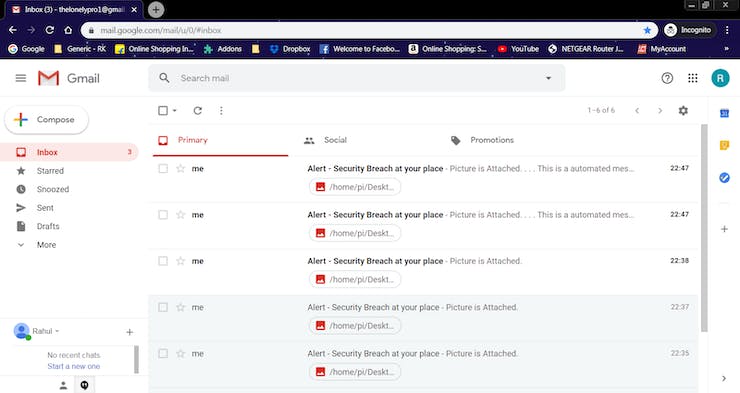 Screenshot of the Gmail

We have also added two relay circuit and a manual reset push button to the circuit. These are treated as normal GPIO to indicate or to inform the status of the theft alert using LED and Buzzers. 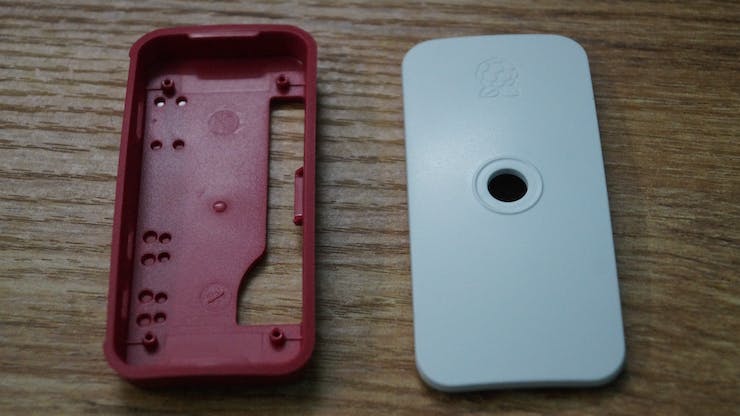 Voila! The connection is done and we are equipped to test it.

Working of the Project

To test the real-time scenario, we deployed it on one of the jewelry shops to test how possibly it could help them and the results were pretty supportive.

If you faced any issues in building this project, feel free to ask me. Please do suggest new projects that you want me to do next.

Give a thumbs up if it really helped you and do follow my channel for interesting projects.

Happy to have you subscribed: https://www.youtube.com/c/rahulkhanna24june?sub_confirmation=1