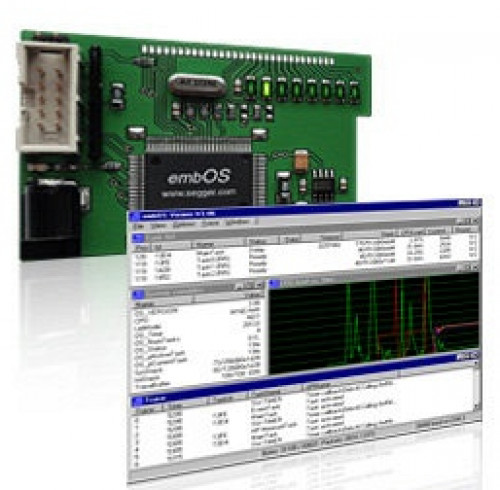 Developer Object Code or Developer Source Code can be used in multiple users.

embOS is a priority-controlled real time operating system, designed to be used as foundation for the development of embedded real-time applications. It is a zero interrupt latency (High priority interrupts are never disabled by embOS), high-performance RTOS that has been optimized for minimum memory consumption in both RAM and ROM, as well as high speed and versatility. embOS has also been ported to a variety of CPUs and development environments.

Features at a glance:

embOS is fully source-compatible on different platforms (8/16/32 bits), making it easy to port applications to different CPUs. Its' highly modular structure ensures that only those functions that are needed are linked, keeping the ROM size very small. Tasks can easily be created and safely communicate with each other using a complete palette of communication mechanisms such as semaphores, mailboxes, and events. Interrupt Service Routines (ISRs) can also take advantage of these communication mechanisms. The software is very easy to use and works out of the box. BSPs and projects for popular eval boards and tool chains are available.

embOS is available as library or source code; the source code version includes libraries and the source code of the libraries. Both versions come with ready to go start projects, BSPs and embOSView. Different builds of libraries are also included: Release/stack check build, typically used in the release build of the application program; Debug/profiling build typically used in the development phase. The libraries offer the full functionality of embOS including all supported memory models of the compiler, the debug libraries and the source code for idle task and hardware initialization. However, the libraries do not allow source-level debugging of the library routines and the kernel. The full source version provides the ultimate options: embOS can be recompiled for different data sizes; different compile options give full control of the generated code, making it possible to optimize the system for versatility or minimum memory requirements. The entire system can be debugged and modified.

embOS simulation visualizes and simulates your target hardware and allows you to write and test your application program without need of a functioning hardware. It compiles the same "C" source on a Windows PC using a native compiler. Therefore the entire application development of the simulation is identical to the one on your target system; all functions will behave in the same way.