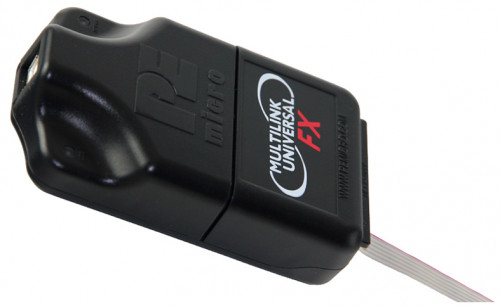 It's an easy-to-use debug and programming interface which allows the PC to communicate with a target processor through the USB port of the PC. The Multilink controls the microprocessor by accessing the debug port of the target. It's able to accommodate communications with a variety of NXP MCUs by featuring multiple headers, which can be accessed by simply flipping open the plastic case. Ribbon cables for the supported MCUs are conveniently included.

The Multilink’s exceptional speed and reliability make it ideal for development. It is natively supported by recent versions of CodeWarrior® (10.x), current P&E software applications, and toolchains from IAR, Keil, Cosmic, and Mentor Graphics. Support varies by architecture, so contact the vendor to determine compatibility.

P&E offers several In-Circuit Programmers for supported architectures, including Kinetis, that can be used with the USB Multilink Universal FX to program internal and external flash devices. The USB Multilink Universal FX also works with many of P&E’s In-Circuit Debuggers for supported architectures to control the target processor’s execution, read/write registers and memory, and perform full C source-level debug.