Cel and Element14 have been at Electronica 2014 this month showing people Robox printer.

I'm looking forward to it arriving but have been thinking about the Roadtest.

One of the tasks we are asked to do for a Road Test is to mention what comparable products you've looked at.

In the Kickstarter project Robox suggested the following list for comparison. 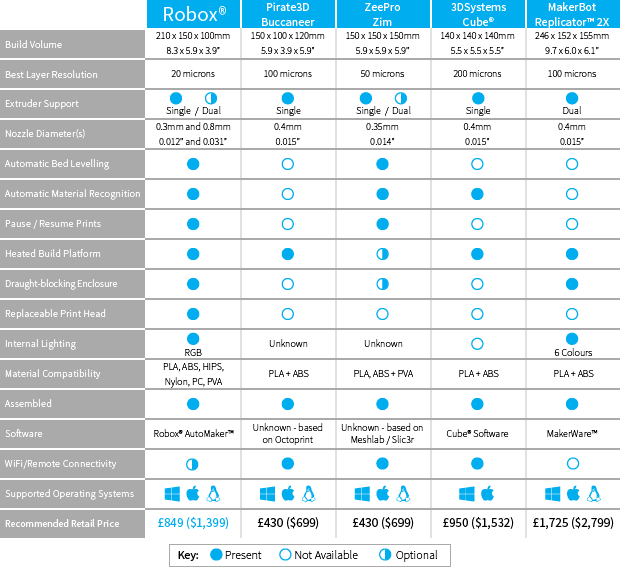 Given that even the most basic printer starts at more than £500 I'd not actually considered buying a printer before as I don't have the budget. However, now that I have a printer on the way I've been looking at what it's capable of doing and what other similar printers exist. The problem is that there are so many other printers around that it's difficult to know how to compare. I decided to use the following criteria to pick some candidates for comparison.

Based on this and the help of some 3D printing stores I came up with the following list.

The technical specs of these printers are similar too although you do get more bang for your buck with the Robox. Specifically for the price it has a finer Z resolution than the competitors, supports a wider variety of materials. There are more expensive printers such as the Leapfrog Creatr HS that matches the resolution but that was out side of my hypothetical budget.

I don't plan to do a detailed chart comparison to these other printers but they might get mentioned again in my later blogs. If you have one of these printers let me know and we might be able to do a comparison test once the Robox arrives.