Smartphone users on the lookout for battery-powered wireless chargers, Bluetooth music players, and funky smart lights that bop to the beat will likely have to settle for a small collection of separates. There are devices that tick a couple of boxes, such as the Black Diamond III or TDK's Wireless Charging Speaker, but good luck finding one unit that does it all. If Justin Kaufman's new crowdfunding endeavor is successful, however, your quest might well be an easier one. The upper surface of his Glowdeck Bluetooth speaker system can charge the battery of any Qi-compatible device placed upon it using its own powerful battery or via a wall outlet, while the lights at the bottom flash to notify users of incoming calls or texts, or sync to the music being thrown out of the front-facing speakers.

Hidden just below the upper surface of the Glowdeck is a series of Wireless Power Consortium-approved overlapping wireless charging coils. As soon as any Qi-compatible device is laid flat on the top of Glowdeck's real maple, walnut or cherry housing, the battery will start topping up. For smartphones that are not already Qi-compliant, there may be a charging case available that will allow cable-free battery charging while you listen to your music library streamed over Bluetooth to Glowdeck's stereo speakers.

The speakers have a rated output of 5 W, and are driven by a Bluetooth amp module that provides a frequency response of 150 Hz to 20 kHz, -85 dBm sensitivity at a 0.1 percent bit error rate, and a signal-to-noise ratio of 80 dB.

Sitting front and center is a 1.8-inch color display that can show time, date and local weather information grabbed from online sources through a home or office Wi-Fi network. It can be customized via a web browser interface on a computer to alert you of the latest stock market data, sports scores or social media trends, and can even be synced to online calendars to remind you of important appointments. The unit runs a set of basic display features when a home router is not available.

Interestingly, if your smartphone is already using your home Wi-Fi network, Glowdeck can grab sign-in information when the phone is held close by to save you the hassle of trying to locate network IDs and passwords. The Glowdeck team is currently working on a mobile app that will allow direct control over the Glowdeck from a smartphone, and Kaufman tells us that he plans to overhaul the display to offer four user-customizable widgets called decks, which will offer "a new way to quickly glean information in real-time using color."

A multicolor LED lighting system down below shines through a transparent bottom. Users can control the brightness and color of each LED, if they wish, and select one of three modes. In Ready mode, the lights will sync to the beat of the music or let users know when a paired phone receives a call or text. The lights will remain steady for missed calls. There's a Steady-On mode for mood or night lighting, and the remaining state is simply Off.

A central microprocessor controls the show, ensuring the charging, lighting and audio systems all talk to each other and react and respond appropriately. There's also a built-in microphone for taking calls while your device is charging up top, or for voice-controlling your phone if it has such functionality. 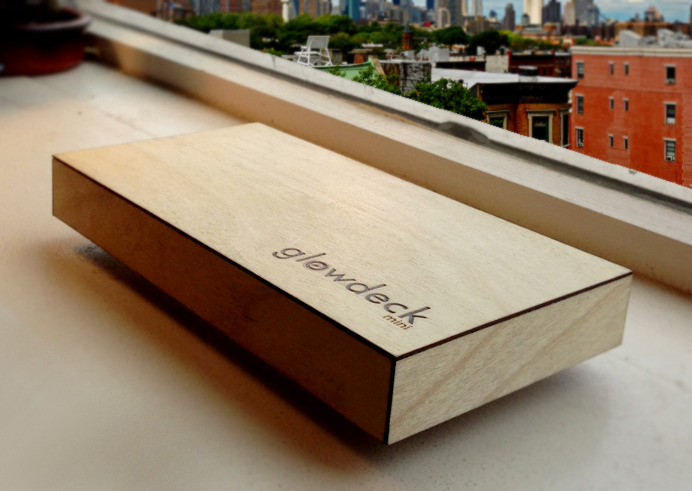 A 5,400 mAh Li-Pol internal battery means that you're not tied to a wall outlet, and can take Glowdeck with you on camping trips or to the park on a lazy Sunday afternoon. Though precise battery life will vary depending on how it's used, in-house testing found it good for over nine hours of music, lights and wireless power.

As I write, Kaufman is planning to introduce something called Glowdeck Press to the system. By lightly pressing down on any surface of the housing, Siri or Google Voice running on a paired smartphone will prompt the user for voice commands. He's also looking into adding other functionality, such as snoozing an alarm.