Some time in 2015 there was a discussion about Soldering and De-Soldering, and what some members owned or used.

At work we have PACE desoldering stations, but they are rather large, and the consumables are relatively expensive.

Personally I find them less than ideal, however that could be because it isn't my own and consequently there are some areas that need attention.

I decided this was an ideal topic to discuss some tricks I've picked up over the years.

Further back in time (no ... not the beginning of time! ) I had an earlier version of a Denon desoldering gun similar to this.

They are a brilliant device.

They are easy to use, have good suction, fit into your toolbag, and the motor is in the handle so there is some vibration transferred to the joint you are trying to desolder.

We had issues with the tips (which weren't cheap) and it may have been linked to our techniques, rather than the tips themselves.

The other issue we experienced, was the control board and a tendency to burn out a resistor.

Sadly mine killed the resistor and I have no longer have any good boards to compare the value to.

Pricing a replacement board from the company some years ago, brought more than tears to my eyes, and I haven't found a schematic.

Eventually that model got replaced with the 7000 which seems to use the same tips, filters and camber.

The price has climbed to something that makes it unreasonable for me to justify.

So my desoldering had to wait until I was at work, or use other techniques.

I have nothing against PACE as a company, but I do have troubles with the de-soldering stations we have at work.

We have earlier versions and the newer models.

While the control side has changed, the basic principle and 'hot' end hasn't really changed much.

The large part contains the power supply, temperature control and vacuum (or blow) pump, and this model has a controllable soldering iron.

The handpiece contains the switch along with the heated end and a collection tube to hold the recovered solder.

The tube (3) holds a bent piece of aluminium (4) to collect the solder and a filter (5) at the end to trap solder particles and most of the flux.

A secondary filter was fitted at the end of the vacuum tube to ensure no particles went through the pump. (17)

Earlier containers were glass, with a rubber end that fitted around the end of the tip.

The clear tube allowed the amount of solder collected to be viewed, and the rubber end made a good seal to ensure all the vacuum went via the tip.

For some reason the glass tube got replaced by a cardboard tube.

They are cheaper, but you only ever broke the tube by rough handling or WAY too much solder causing localised overheating.

However there is this Health and Safety in the workplace and it could be this that has resulted in our work using these instead.

They are more difficult to clean out since you can't stick something in the other end to push out the bent aluminium 'catcher'.

Perhaps they aren't designed to be cleaned out.

What this picture is not showing is the end is rounded and pushed back on itself to form a rounded end that goes around the end of the tip.

The glass tube seemed to seal better around the end of the tip.

In both models the handpiece is 'in line' so you hold it like a very large pencil.

As I said, the PACE units aren't mine, so it's very likely that there are some tweaks to make, or the end seal needs to be changed.

Whatever the reasons, I've never had much luck de-soldering stuff at work using these.

The results have been frustrating, plus it seems to take a lot longer due to the double and triple de-soldering plus mechanical manipulation (see later).

You can use a hand held De-Soldering Pump to suck the solder out.

These work well on one or two joints, but can be a pain to use.

To use them, you press down the plunger to compress the spring.

Heat up the joint and bring the nozzle as close as you can, then press the release button.

As the plunger is released it sucks the hot solder up inside the pump.

Obviously the closer the nozzle is to the joint, the more effective it is.

One little trick with any de-solder pump/plunger is that you can stretch the spring.

Make sure the O-Ring is clean and lubricated and check the nozzle is not damaged, and it should perform well.

The best model I have is a Phillips branded version that is slightly smaller than others, and utilises a smaller nozzle.

This means you're not fighting the soldering iron for the same space, and the suction velocity is higher.

I should have brought three or four at the time, because they aren't available that I can find, so I'm looking after mine.

Something to watch for is models where the nozzle is inserted from the outside.

When you push the plunger down fully, it protrudes through the nozzle to clean out any solder lodged on the sides.

With the external insertion type nozzle, they can be pushed out.

Models with softish nozzles can deform rather than clean out properly ...

I prefer the screw together models. I've seen the other 'twist lock' style versions fly around the room at the most inopportune moment.

It's rather hard to see all these things from a catalogue, so don't be afraid to ask, or buy different types until you find the one you want.

If you have smaller hands the length can also be very important as they are meant to be used with one hand.

(I'm happy to do some road tests on different types ...but send spare nozzles as well)

It works for surface mount, but isn't very useful on thru hole components.

It is very useful for cleaning up holes .... but then so is the solder pump.

Don't be fooled, they come in different widths, and the cheap stuff may not work as well.

This soldering guide is rather good, and they use the braid/wick to clean up the joint.

The thru hole soldering guide is here

The whole SMD guide is here, and it includes reflowing using the frypan/skillet along with a toaster oven.

The last thing you want to do is damage the board.

It may be worth sacrificing the $1 component by cutting off the legs and then removing each leg seperately.

This works well for ICs, and is a must for header pins or other sockets. 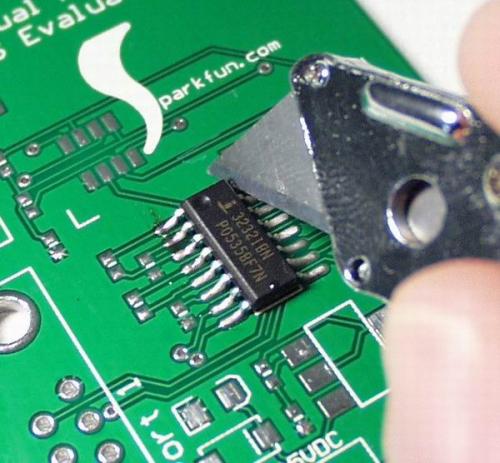 Personally I'd use sidecutters to nip each leg, rather than risk cutting the board.

For headers or sockets you need to be careful not to damage the platethru part of the hole.

Generally the hole is snug, so it's important to seperate the pins.

Step 2, heat and remove each pin.

You can use a Rework Station to heat larger areas and then remove the component.

There are low temperature solders that can aid that technique. 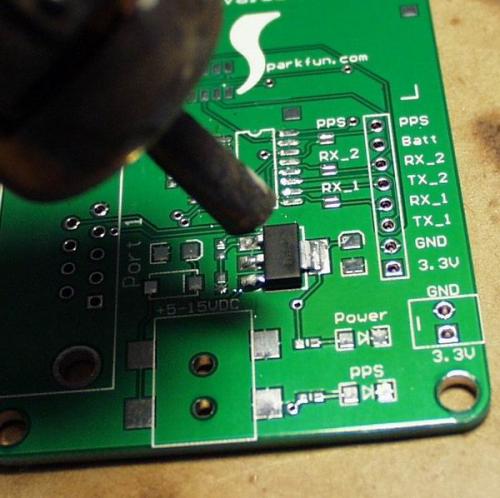 Removing what solder you can, and then resoldering the joint can help.

I guess it breaks up the surface oxidation and allows all the solder to flow when you come back to desolder it.

Sometimes a little sideways pressure can break the small bridge of solder that is resisting the component from exiting the board.

I've also fitted the board into a holder and applied heat to one side, and a solder pump to the other side.

Whatever you do, avoid excess heat to small pads, or you'll lift them from the substrate, and then have problems putting the replacement component back in.

I was lucky enough to go to England in August of 2015 and meet some of the other members of element14, along with a visit to the Leeds distrbution centre.

Just prior to this a few of us were having a conversation about desoldering stations and when I mentioned the issues I had, Problemchild kindly offered to obtain one of these for me.

I can only find them on the cpc site http://cpc.farnell.com/duratool/d00672/desoldering-station-uk-eu-plug/dp/SD01384

Along with the station we decided a spare handpiece, tips and filters would be useful.

Luckily I didn't have any desoldering jobs to do, so it sat under the workbench waiting for that special day.

When I powered it up to use it, I had some issues with a distinct lack of suction.

As it was new I had no reference point, so a process of elimination began.

The suction pump worked, and there was suction at the collection tube.

The tip was clean and free with no restrictions.

The collection tube has a filter inside, plus an end plate that floats, and I thought it might be blocking the end.

As you applied suction and blocked the flow, the pump note changed to a deeper 'growl' but when it was assembled it sounded like it had flow.

Unlike the PACE models, the output of the pump ends inside the unit, so you don't get a 'blow' port to check.

By now you will be assuming that I opened up the manual ...... but that would be cheating !.

BTW I have since checked the instruction manual, and it inlcudes a diagram that doesn't match the collection tube, but no other useful information that would help.

The tube on this is similar to the Denon and PACE. It fits between the tip and the suction line.

except this one contains loose bits....the photo below shows what I mean.

When I first opened the handpiece to see the collection tube, the various bits came out.

The aluminium disc is supposed to catch the solder, and the holes around the outside allow the air to flow.

The issue is nothing is tight in the tube, so as you return the collection tube to the handpiece any suction wants to take the path of least resistance.

At the front there are two rubber like seals. The larger one fits the tube, but the smaller one was just floating.

In the end I fitted the smaller seal over the end of the protruding tip.

I figured it was either going to smell bad as the material cooked, or it would seal around the tip.

My later assumption was correct and it sealed the 'leak'.

So this unit now sucks very well, and easily cleaned up the solder joints.

My next minor issue is that I'm not happy with the loose nature of all the internals.

The spring tries to push the disc and filter out the suction end whenever you open it.

I'm thinking that a bent piece to collect the solder on and a larger disc that holds the filter and increases the exposed filtering area would help.

In the meantime I am a happy camper, but I do need to find a spare end seal along with the tube and tube seal just to make sure the whole unit outlasts me.

This content has been marked as final.  Show 35 comments
By date: By tag: