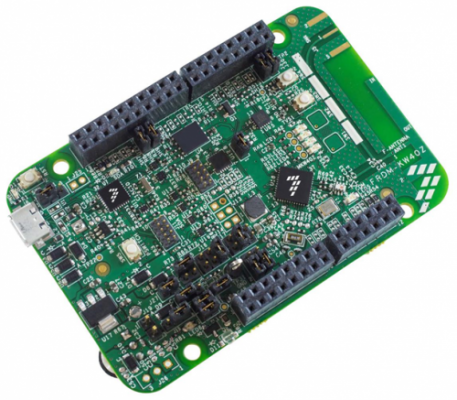 Global electronics distributor element14 today announces the addition of a new NXP® low-cost development platform to its extensive portfolio of products for the Internet of Things (IoT). The FRDM-KW40Z is enabled by the Kinetis® W series KW40Z/30Z/20Z (KW40Z) family and is ideal for applications in the IoT space, including home automation, building automation and healthcare.

Built on the ARM® Cortex®-M0+ processor, FRDM-KW40Z features an integrated 2.4 GHz transceiver supporting Bluetooth® Smart/Bluetooth®Low Energy (BLE) v4.1 and/or IEEE® 802.15.4standards. The kit contains two boards, enabling point-to-point, out of the box connectivity. Each board can be configured as a Freedom development board or as a Freedom shield for connection to a host processor.

The FRDM-KW40Z hardware is form-factor compatible with the Arduino™ R3 pin layout, providing a broad range of expansion board options. The FRDM-KW40Z also features a highly-sensitive, optimised 2.4 GHz radio with PCB F-antenna, which can be bypassed for connection to test equipment via SMA connection, multiple power supply options, push and capacitive touch buttons, switches, LEDs and integrated sensors.

The USB-KW40Z, also added to the Farnell element14 portfolio is the same development platform as the FRDM-KW40Z, but available on a convenient USB dongle form factor. The USB-KW40Z can be used as a Bluetooth® Smart/Bluetooth® Low Energy and/or IEEE® 802.15.4 packet sniffer or development board for optimal connectivity and efficiency.

The packet sniffers are essential for wireless network development, allowing over-the-air traffic monitoring, with the BLE and 802.15.4 protocols allowing the continued development of power efficient IoT applications, including BLE functionality in the health and fitness wearables. The 802.15.4 standard has been widely adopted as the premier ultra-low power, low-cost, mesh networking technology for home automation applications, with the possibility of more growth ahead due to increased adoption in commercial and industrial applications, such as lighting and building automation.

The growing demand for IoT applications is driving an increased need for development platforms that enable engineers to integrate low cost, low power network protocols into their designs. By introducing the FRDM-KW40Z and USB-KW40Z to our ever-expanding portfolio of IoT products and capabilities, we can give the engineering community access to the very latest technologies that will help them to push the boundaries of innovation in connectivity and IoT applications.

Get more details, downloads and participate in discussions on the element14 community.

About the Premier Farnell Group

Premier Farnell plc (LSE:pfl) is a global leader in high service distribution of technology products and solutions for electronic system design, production, maintenance and repair. Trading as Farnell element14 in Europe, Newark element14 in North America and element14 across Asia Pacific, it had sales last year of £982.7m, the Group is supported by a global supply chain of more than 3,000 suppliers and an inventory profile developed to anticipate and meet its customers’ needs.

Premier Farnell works to bring to market development kits in a variety of applications, enabling it to support the customer from design concept through to production.