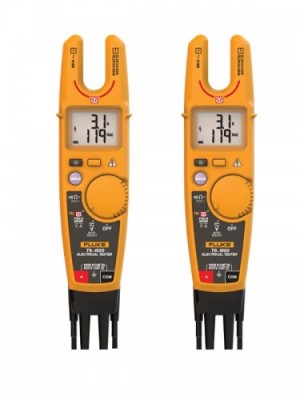 The Fluke T6-600 and T6-1000 Electrical Testers, use a novel non-contact voltage sensing technique for fast, safe and reliable voltage measurements, are both now available from Premier Farnell, the Development Distributor.

The FieldSense technology used in the T6-600 and T6-1000 replaces the traditional test lead contact probe with an open fork construction in which the fork is slid over a conductor and detects the voltage level. Voltages up to 1000 V AC can be sensed through the open fork without using test leads.

This technique makes it possible to carry out true RMS measurements on voltage and current simultaneously. It also allows the user to take measurements in situations where it used to be considered impossible, including crowded junction boxes and conductors with inaccessible end points, and saves time by taking measurements without the need to remove covers and wire nuts. The fact that measurements can be made with one hand also reduces the potential risk of electric shock.

“The overall benefits of the FieldSense technology used in these Fluke Electrical Testers include huge time savings and less chance for something to go wrong”, comments James McGregor, Head of Test and Tools at Premier Farnell, “With this major new development, Premier Farnell are not only making technicians’ jobs easier and safer but also enhancing the speed and productivity of the test process.”

FieldSense technology is also used in the new Fluke PRV240FS Proving Unit, also available from Premier Farnell. This device provides a fast, safe and reliable method to verify that an electrical test tool is operating properly before any live tests are conducted and without having to make electrical contact. It makes use of the concept of “test before touch”, which involves verifying a test tool against a known live source before and after the actual measurement. This sequence verifies that the test tool is operating properly during the actual measurement.

The Fluke T6-600 and T6-1000 Electrical Testers are available to buy from Farnell element14 in Europe, Newark element14 in North America and element14 in Asia Pacific.