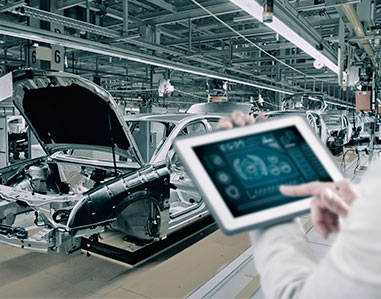 Premier Farnell, the Development Distributor, has added new content to its IoT Hub providing new insights into the role of the Internet of Things in smart factories, IoT security, AI in IoT infrastructure, smart sensors, and wireless solutions.

The IoT hub, a major section of the company website, contains a variety of IoT news items and feature stories, case studies, products, and interviews, as well as technical articles exploring the possibilities of IoT applications.

The new content on Smart Factories covers the concepts of the Smart Factory, the Industrial Internet of Things (IIoT) and Industry 4.0, and shows how many organisations are implementing them now as well as investing significantly for the future. Productivity, flexibility and safety are the key goals, aided by developments in technologies such as automatic guided vehicles (AGVs) and robotics.

These machines must function as nodes on the factory network while performing their tasks with speed, accuracy, flexibility, safety and reliability. The new content from Farnell element14 has shown how designers are improving these aspects of AGV and robot performance, through the availability of advanced integrated circuits and support products from Farnell element14 which are allowing faster and better solutions to be developed for sensing, signal processing, local processing, power management and communications.

Other new content on the Premier Farnell IoT Hub includes the second and third in a series of articles on IoT security, covering Cloud considerations and infrastructure, respectively. The IoT increases cyber security risk, partly because it multiplies the number of data sources, entry points and data flow into a cloud resource and partly because IoT devices, unlike corporate computing equipment, are probably not in a physically or electronically secure environment.

These articles look at some of the ways in which security can be compromised and the measures that organisations can take to protect themselves, Key topics covered include prevention of hacking of IoT connected devices, protecting the data both on the devices and when it is being transmitted, securing devices against being copied, and authentication.

The role of artificial intelligence in the IoT infrastructure is also included in the new content on the Farnell element14 IoT Hub. This article starts by looking at what AI is, and what it could become. It then considers the current relationship between AI and the IoT, and how this is bringing benefits at all levels. It finishes with a roadmap that defines the possible future stages of AI development.

There is also a feature on Smart Sensors, this material describes how sensors have evolved from devices that simply convert physical variables into electrical signals into something more sophisticated to perform technically and economically viable roles within the IoT environment. It reviews the IoT’s expectations of its sensors – including what must be done to achieve the large sensor arrays characteristic of the IoT - and shows how manufacturers have responded, with improvements to fabrication, integration and built-in intelligence, culminating in the concept of the smart sensors now in wide use.

Finally, the new IoT Hub content includes the first of a series of articles on “Wireless solutions”, covering the LoRaWAN as an IoT network solution. LoRaWAN is a low-power wide-area network (LPWAN) specification that allows battery-powered devices to connect to an IoT network over a long range, using a low bandwidth, in a regional, national or global network. It is intended as a low-cost open standard with easy accessibility, and does not require WiFi-type passwords or mobile subscriptions.

This article discusses the nature of LoRaWAN and its underlying technology, and then shows how developers can start to engage with the standard with a currently available end-device chip and associated demonstration kit. It also gives an example of how designers and users can take advantage of LoRaWAN’s licence-free model to gain low-cost and simple access to the network.

Future IoT Hub content will include features on development solutions for IoT, “Wireless Solutions: Part 2 – Bluetooth”, and a question & answer session on Li-Fi in conjunction with developers pureLiFi.

Farnell element14 is part of the Premier Farnell group of businesses, a global technology leader with over 80 years in the high service distribution of technology products and solutions for electronic system design, production, maintenance and repair. Premier Farnell uses this experience to support its broad customer base, from hobbyists to engineers, maintenance engineers and buyers as ‘The Development Distributor’, working with leading brands and start-ups to develop new products for market, and supporting the industry as it seeks to develop the current and next generation of engineers.

New features on Premier Farnell's IoT Hub include the Internet of Robotics and why Development Boards are essential, but the Internet may not be