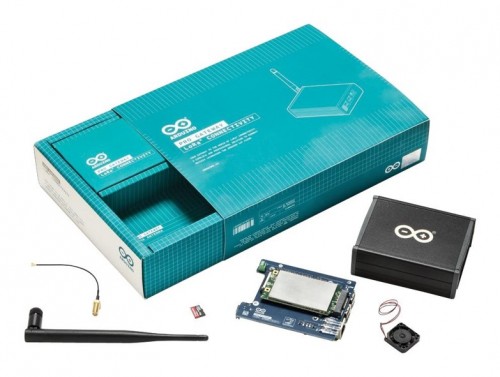 The Arduino Pro Gateway connects seamlessly with Arduino’s MKR WAN 1300 development board, allowing existing Arduino users to design and prototype long-range, low-power IoT devices in a familiar Arduino environment without changing platforms. Installation, provisioning and remote management of the Gateway are greatly simplified through the Arduino Create platform, enabling users to leverage LoRa connectivity in many potential applications including:

The new Gateway is designed around the Semtech SX1301 digital baseband chip: a powerful digital signal processing engine which enables robust connection between the Gateway and a large number of wireless end-points spread over a wide range of distances. The Arduino Pro Gateway offers up to eight LoRa channels in the 868 MHz frequency band, allowing it to receive up to eight LoRa packets simultaneously - making it the ideal device to use in LoRaWAN gateway applications.

The Gateway features a Listen Before Talk (LBT) capability, which allows users to transmit at higher power on the first free channel, achieving longer ranges than conventional gateways for LoRa. The gateway also comes pre-installed with an optimized packet forwarder and a carrier grade network server for LoRaWAN that is running on the Arduino Cloud, powered by A2A.

In addition to the Gateway with LoRa connectivity and the SX1301 baseband chipset, the kit contains:

Farnell element14 will be exhibiting at Embedded World, Nuremberg Germany from 26-28 February. Visitors can view the new Arduino Pro Gateway Kit at stand 1-370, where Farnell element14 is collocated with sister company, Avnet Silica.

element14 Community Issues ‘Design for a Cause’ Challenge