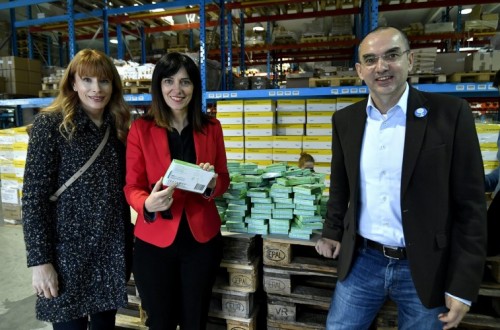 Premier Farnell, The Development Distributor has signed an agreement with the Croatian Academic and Research Network (CARNet) for delivery of 45,000 BBC micro:bit in an official national rollout led by a privately financed nonprofit IRIM. As part of the national rollout, all students in Grade 6 will receive a BBC micro:bit to help them develop their skills in the world of coding and programming. Iceland and Singapore are already fans of the BBC micro:bit with both their governments rolling out the device to one age group of schools through a national education programme. Premier Farnell operates as Farnell element14 in Europe, Newark element14 in North America and element14 in Asia Pacific.

IRIM, a privately-funded Croatian nonprofit organization, has already deployed more than 20,000 BBC micro:bit in over 1,000 elementary and secondary schools, universities and libraries through the largest crowdfunding campaign in Croatia to date. In this deployment IRIM successfully educated 2,000 teachers, most of whom had never before, or rarely, coded, evidencing the transforming potential of the BBC micro:bit and its ecosystem.

The pocket-sized programmable device helps children learn how to code and develop their electronic and technological skills.

Following the success of its launch in the UK and roll out to one million year seven children, as part of the BBC’s Make It Digital campaign, the BBC micro:bit is now available to buy across the globe.

Ralf Buehler, SVP Sales and Marketing for Premier Farnell, says: “Countries across the globe continue to face a skills shortage in coding, digital technology and engineering. We are seeing an increase in interest in developing educational programmes that provide children with access to coding skills through hands on learning to help tackle these challenges for the future. The BBC micro:bit is a proven tool to help schools inspire children, through an introduction to coding, to consider Science, Technology, Engineering and Maths (STEM) subjects and potential careers within these industries.”

Nenad Bakić, the President of IRIM stated: “We have developed an extensive family of STEM projects in Croatian schools and neighboring countries. We were looking for a technology which could totally democratize teaching of coding, and we are very happy to discover the BBC micro:bit, as a very unique piece of technology in that regard. Since coding has not been a regular part of Croatian curriculum, this deployment in fact means official introducing of coding to Croatian schools.”

Since the UK launch, research undertaken by the BBC found that 39% of girls said that they would now definitely choose ICT/computing subjects compared to 23% who were surveyed before. 86% said it made computer science more interesting and 88% said it showed that coding isn’t as hard as they thought.

The new contract between Premier Farnell and the CARNet will replicate the success of the UK launch of the BBC micro:bit and will help support the development of the next generation of engineers, via coding from a young age.