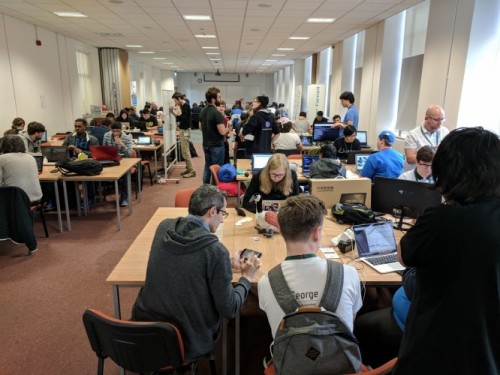 To support Farnell element14’s commitment to the electronics education and maker market, the company has become the exclusive Gold Hardware Sponsor of Astonhack, a 24-hour Hackathon organised by Aston Computer Science Society and held at Aston University in Birmingham as part of Major League Hacking’s 18th season.

The organisers define a Hackathon as “where teams of up to four people work together to build something over 24 hours. Challengers have 24 hours to build, code, hack, solder and program their way to victory in a frenzied, sleep-deprived festival, featuring workshops, games, pizza and lots of creating.”

Sponsors present themes for which prizes will be awarded and at the end of the 24 hours teams present their work to the judges. Under the terms of their sponsorship, Farnell element14 provided a hardware kit, one-to-one support and a hardware workshop free of charge for every attendee. The hardware kit included an Orangepip Kona 328p s, a Raspberry Pi3, and a number of other components. The hardware was provided as a kit so that soldering workshops could be included in the event.

The 2017 Astonhack, held on the 11th and 12th November, was attended by 250 hackers, programmers, electronics students and hardware experts. Phil Hutchinson from the element14 Community also attended the event and gave presentations to the attendees.

A spokesman from Aston University said: “I just want to thank all at Farnell element14 for all their help and sponsorship of Astonhack. It would not have been possible to integrate hardware into the event without their backing. In particular, the hardware and soldering workshop went better than we could have imagined.”

You can find out more about the projects created at Astonhack by visiting the element14 Community. If you are planning a Hackathon in your region and would like to get in touch with Farnell element14 about sponsorship opportunities please contact Phil Hutchinson – element14 Community. Phutchinson@premierfarnell.com.

Farnell element14 joins the Football Frenzy and gives Customers in Europe the Chance to Win!

Farnell element14 offers students and makers chance to win over £5,000 worth of kit in its “University IoT Challenge”

Readers of elektroniknet.de recognise Farnell element14 at “Product of the Year” awards

Farnell element14 presents a ‘World of Electronics’ at RTS Embedded 2017